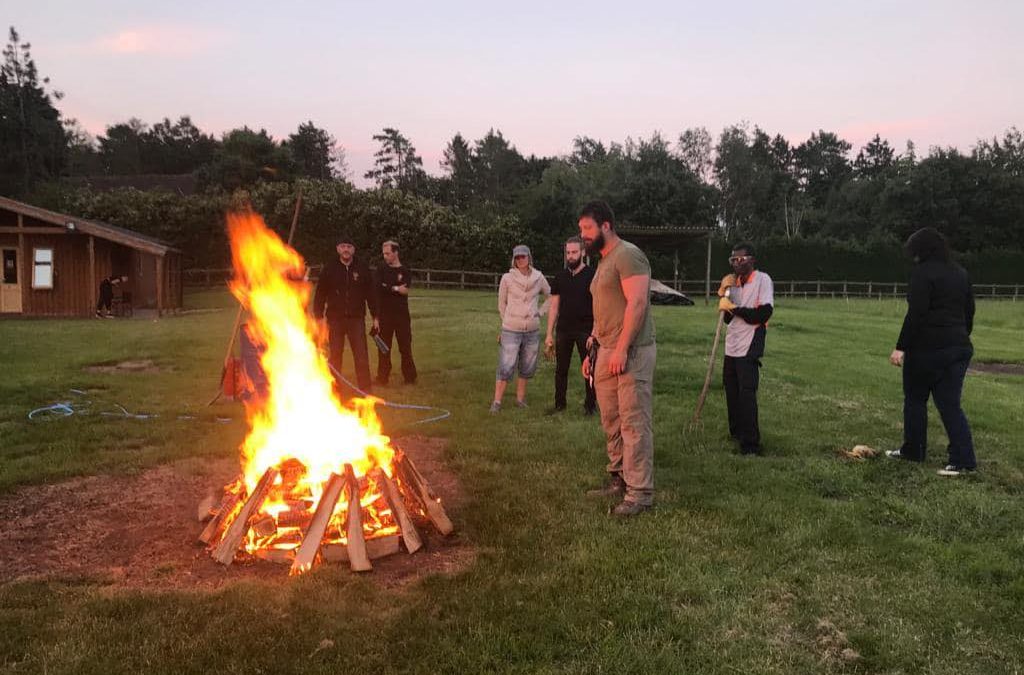 “If you take the things you’ve learned here this week forward, you’ll be amazed at how the world conspires in your favour”

With a dark and thick wall of trees behind me and a huge shimmering field of solar panels to my front, I was working a petrol driven log splitter, breaking timber down into kindling.  I’d finished my F.I.T. only three days earlier and I had, and still have, plenty to process.  In that moment I was surrounded not only by living breathing trees, but also those that were recently felled, their long-deceased ancestors in the form of petrochemicals in the fuel tank, contrasted by the clean green new future of electricity.  Although I’m certain there’s a deeper truth and moral to learn from this I was struck by of death, rebirth, renewal and growth in this post lockdown time.  I thought of the futility of old cycles and patterns moving forward into a world in which they’re obsolete, but mostly of how we can’t take for granted that anyone else will enact the changes that are needed, and that we need to push these things forward ourselves.

“Dragon”.  Before I’d even finished speaking the name their eyes were already locked onto mine with pure focus, as I’d come to expect by this point.  “Would you allow me to go last?”  A warm smile and slight nod signalled agreement and Dragon’s small but strong frame moved quickly to the stage, answering Barry’s call for the next volunteer.  In moments two practice strikes had been perfectly executed, and then with a shout Dragon’s palm smashed clean through brick, utterly destroying it to thunderous applause.  I’ve always been a “volunteer first and get it over with” kind of guy, and because of this I’d been either first or second on nearly every task up to this point.  That day I wanted to experience what it’s like doing the opposite and watching every other delegate on the course completing a task that I hadn’t yet done myself while giving support.  This was one of many times during the F.I.T. that I was able to experience a paradigm shift and find myself psychologically and emotionally on unfamiliar ground.  That’s what I’d come for, that’s what I needed.

Looking back further, I first spoke to Barry Collins about firewalking training in 2017, this meant the July 2021 F.I.T. had been a long time coming, but as soon as I booked it on 8th June it arrived in the blink of an eye.  Other than blitzing through Tolly’s trilogy at 2.5x play speed on audiobook, for my course preparation I was deliberately doing as little research as possible.  I wanted to begin this course with as few preconceptions as possible.  I wasn’t sure what to expect but guessed the four days would be a bit of practical training on fire safety, how to instruct your students and a lot of classroom work on the business model and what to look for in insurance policies.  That just made sense, but I was still looking forward to the practical elements.

In ones, twos and threes 11 nervous looking strangers congregated at The Retreat, Knarr Farm and greeted each other with excessive formality.  Few had come from a good night’s sleep and even fewer had any idea what we were to expect.  Day one had arrived.  The day began as all others would, with a freeform “copy each other” dance party which loosened us all up pretty effectively.  As this was instructor training we had to bear in mind that everything we were doing was taught with the potential of us teaching it to our students someday soon.  The rest of the day was spent continuing with tasks that bring people onto the same page.  In learning how to manage the groups we’d be training we found ourselves more in sync with each other.

At the end of day one, after our first firewalk together, I realised that an old ghost was reappearing and the imposter syndrome I’d not felt in years was trying to make a return.

2020 had been a strange year for everyone.  I’m not going to go into detail about why I was medically discharged from the Army in 2018 other than to say the reasons were psychological.  The last time I saw my now ex-fiancée was late March 2020 in Syndey.  I’d come home to South Wales to help my parents during the pandemic, but once they were ok I began a 14 month battle with Australian Immigration to return to the one I love.  Waking up every morning with your first though being “if they’ve processed my visa I could be flying this time next week” is at heart an optimistic state, but as days turn to weeks, and months and over a year it takes it’s tole.  You can’t make plans further ahead or invest where you are because you don’t expect to stay, or making plans feels like conceding that you’ve given up hope, and you can’t make plans or invest in where you’re going because you have no idea when you’re actually arriving.  In addition to all the other crazy stuff happening through the pandemic I was in a state of limbo unlike anything I’d previously experienced, and it sucked.  I had some unresolved issues from my service in Afghanistan in 2010 that had me feeling disconnected and unable to experience my emotions directly but the past months had made things significantly worse.

“I think the saddest people always try their hardest to make people happy because they know what it’s like to feel absolutely worthless and they don’t want anyone else to feel like that.”

I’ve always enjoyed coaching.  Seeing someone leave with a skip in their step and a glimmer in their eye because something you did made them realise that they’re stronger, better and more capable than they though before they met you is one of my greatest pleasures.  However, even this turned sour for me as my inability to help myself made me feel like a fraud.  Through the various challenges of the F.I.T. and the love I received and gave with the crew and my fellow delegates I’ve been able to reconnect with myself in a way that I didn’t think possible.  I’ve rediscovered a part of me I thought I’d lost.  I know my own value.  I know how to heal myself and I know I have the tools to help others with love and compassion.  I have the tools I need to help people heal in a similar way to how I did.  I’m a member of a new tribe and I’m excited at the future we can forge.

I couldn’t make up all the ways that all the pieces have fallen into place in the last week since my F.I.T.

I hope you’ve enjoyed me sharing a piece of my journey, but I’m far more excited about the steps that lie ahead of us than the ones that are behind us.  I can’t wait to see where the next 12 months take us.